Management of you hay field and making hay is much like managing your own ecosystem. It is important to keep various plant species in your hay meadow.

You need a variety of grasses and legumes to provide your livestock with nutritional value throughout the winter months.

It is important to regulate your hay meadow when making hay by mowing before the weeds go to seed, and by carefully monitoring the mineral content of your soil.

The farmer can keep favorable plants healthy and eliminate troublesome weeds by these methods and can therefore eliminate the use of chemicals for weed control.

To establish a hay meadow or pasture, it often needs to be limed to raise the PH level between 6 and 7 which is slightly acidic.

Cattle manure is excellent fertilizer but you may need to resort to chemical fertilizer as well. Some farmers will plow up their new pastures to loosen the soil.

But I’ve found that is not necessary. In my area, you would be plowing up a new layer of rock and create another problem. Erosion is also a concern when plowing, especially if your hay meadow in on a slope.

One method that I use in seeding my new pastures or hay meadows is to roll out my round bales of hay in the winter months.

This allow the cattle to eat the hay and also will spread the good grass seeds that you need. Your cattle are also fertilizing the new land at the same time.

Sometime people confuse the terms “hay” and “Straw”. They are very different. When making hay, hay is dried grasses and legumes.

Hay is usually cut while the grasses are young and tender and has not released its seed. One the other hand, straw is the stalks of grain plants and stems.

Hay should be palatable and nutritious for livestock consumption, while straw is often used for bedding and contains very little nutritional value. 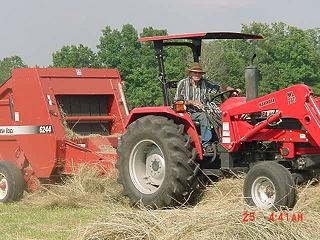 Joe Proctor is seen above making hay in my hay meadow. He has been a tremendous help to me and has taught me a lot about hay production.

Joe has been baling hay for many years for himself and others in our community.

Making hay from legumes are an excellent source of protein for livestock; clover and alfalfa are leading legumes for hay crops, but it really differs in different parts of the country.

The best hay when hay making comes from grasses and legumes that are cut in the early blooming stage. They have their highest nutritive value at this stage.

If you allow the plant to set seed before cutting, the plants become tough, dry, and woody, like straw.

So, In my case, I like to let the seed develop and cut quickly. I then get good quality hay and it also provides for new seed to create new pastureland.

You can also make hay from immature oats and other grains. They should be cut when the kernels are soft and milky.

When you are making hay, always cut your hay on a clear day so that the hay can dry on the ground in the sun’s heat. That sometimes is hard to do. You must watch the weather forecast regularly and look for an opening of dry weather and hope for the best.

After you cut your hay, you may want to tether it with a tether machine attached to your tractor. This will pick the hay up off the ground and throw it into the air before it lands back on the ground in a sporadic manner.

Your hay will lay there until you rake it allowing more air circulation and better curing. After you allow the hay to dry for a day or two, rake the cut your hay into long parallel rows.

These rows are known as windrows Your hay is ready to store when its moisture content is down to 15 percent. A good way to judge its readiness is to pick up a handful of hay and then bend it into a U shape. If they make a reselling sound and break fairly easily, it is ready for baling. If the hay is pliable and takes a lot of twisting to break, the hay is still too damp.

If the stems are brittle and they snap off easily, your hay is too dry. It would be safe to bale but will have lost much nutritional value. Hay that is too dry may also lose much of it leaf content. The leaves are the most nutritious portions of the plants, and are important for good quality hay.

Good hay often has a hint of green even though it is thoroughly dried. Alfalfa hay is even a bright green. Hay is best stored in bales. When making hay, it should be protected from the weather, but today we have developed a baler that will place a net over the bales and help protect the hay.

If you are making hay and it is left out in the weather, in the case of round bales and lack of storage area, the first 6 inches of hay may be lost. Wet hay will rot into good compost, but it is bad feed. It can get moldy and possibly poison the animals to which it is fed. In extreme cases it will ferment, and the heat produced may start a fire.

I have personally left hay out because I didn’t have a good barn to store it in and I have found that my hay did get extremely hot which was scary.

If you have no barn or shed, a good quality tarp over the hay can give a fair degree of protection from the effects of rain and snow. 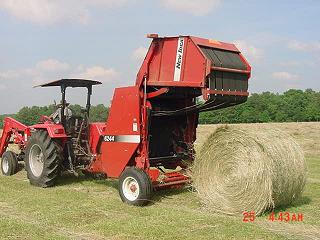 Return from Making Hay to Self Sufficient Farm Living Homepage

Tell Us About Your Farm Journey... How Do You Monetize Your Farm or Homestead and What Do You Produce?

I've Been A Goat Farmer For Over Twelve years and can help you be successful too!